Sprovieri is pleased to present “This Way – Waiting for the Blackout” the second exhibition at the gallery by Jorge Peris.

For this exhibition the artist continues in his mode of creating site specific works. In this latest installation, Peris challenges the viewer’s perception through creating a 360 degree experience within the existing gallery space in which the viewer and their surroundings become both the subject and the object at the same moment within a dynamic flux.

‘This Way – Waiting for the Blackout’ utilizes an ingenious combination of artistic devices including camera’s, projectors, mirrors and mechanical engines, sound and light. It is an installation that fragments and multiplies, duplicates and nullifies in equal measure, which through repetition creates a sense of loss of self within the spectator. The familiar becomes unfamiliar, a radical and unpredictable spatial disorientation occurs that is on the cusp of reality. A precarious indefinable place that challenges the senses of the viewer and the perceived physicality of the gallery space.

A microphone installed in the space records and transforms the viewer’s movements as they move through the space, provoking a constant oscillation between camera and projector, viewer and voyeur. Peris’ work is often surrounded by an atmosphere of curiosity and trepidation of the unpredictable nature of what the next step may bring as he pushes the boundaries to their limits. 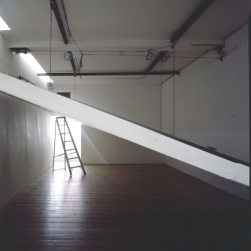