‘In saying yes, Andy Warhol agreed with social and economic reality. Warhol is the artist of agreement. To agree in this sense, though, is to confront oneself with reality as it is. To agree is the precondition for either accepting or refusing something; only by agreeing can one change it. Andy Warhol was courageous. He
cooperated with reality in order to change it. He showed me that reality cannot be changed unless you agree with it.' (Thomas Hirschhorn)

Sprovieri is delighted to present "The Agreement", the third solo exhibition by Matheus Rocha Pitta at the gallery. Rocha Pitta, inspired by Thomas Hirschhorn ethical reading of Andy Warhol, will show a series of concrete slabs with contemporary clips from international newspapers featuring – often powerful – people in gestures of agreement.

In "The Agreement", Rocha Pitta works with the curious technique of pouring concrete onto findings, a hybrid of cast and collage. It is based on a common, cheap way to cover graves: if one can’t afford marble or travertine, one uses a concrete slab instead. In order to prevent the poured concrete from sticking to the wooden casting mold, the latter is laid out with newspaper, which thus inevitably becomes part of the underside of the slab as the paper is fixed in place by the hardening concrete. The dark joke is, of course, that the dead will have something to read. Correspondingly, even in the ‘dead’ art object, crucial insights might still be encapsulated, and wait to be unearthed.

The project was first showed at Fondazione Morra Greco, in Naples, as part of a series of solo shows curated by Jörg Heiser. Incidentally, it was in the Naples region that Pozzolana concrete was already used first by the Greeks and then the Romans; also, Rocha Pitta came across ancient Greek funerary steles depicting the dead person shaking hands with a divinity – as a gesture of assurance that the dead will continue to be under the protection of that divinity. Rocha Pitta had to think of contemporary media images of all kind of people shaking hands, embracing, or sometimes kissing – all signaling or performing some form of agreement. Using these images on the concrete slabs – divided up in a series of 9 diptychs – that encrypts for the paradoxical nature of the agreement as an affirmation of change. 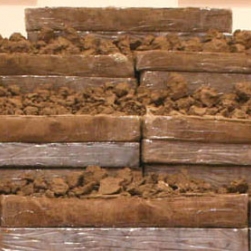