Sprovieri is delighted to present Alighiero Boetti: Magie straordinarie, works on paper. Exhibiting fourteen works from 1965 to 1983, this exhibition explores Alighieri Boetti’s career, with early examples from several seminal series that have rarely been seen before. The exhibits are works on paper, mainly black and white, made with pencil, India ink and - in the case of the well known 'Lavori postali' - envelopes, which encapsulate with their simplicity of media the playful performative and participative quality of Boetti’s practice.

In 1988 Boetti described his first twenty years of work: "I think I placed myself in a position of research, a state of attention and curiosity, which allows me to see many things and having fun with the world. In fact, behind its appearances there is extraordinary magic (magie straordinarie): magic of words, magic of numbers…as there is magic in the world of numbers, there’s magic in the world of minerals, as well as in that of the animals. All these worlds have been separated and organised in hierarchical order - but I think the truth is, there are no hierarchies as we are always in front of the same thing: the manifestation of a drawing within each thing".

Starting his artistic career as an autodidact in Turin in the 1960s, in 1965 Boetti produced a body of works with India ink, doing black Chinese shadows and silhouettes: simplified contours of combs, tumblers, and bottles, industrial equipment, desk lamps, microphones: "With microphones, lamps and viewfinders, still cameras and movie cameras, I wanted to create situations that engaged the viewer in a new dimension. Of the theatre, in short." Two works from this series are exhibited.

In 1969 Boetti started the series of work ‘Cimento dell’armonia e dell’invenzione’. The title refers to Vivaldi’s Opus n. 8, containing twelve concertos which include the Four Seasons, as well as to a type of music played by Boetti himself producing compositions based on the proliferation of numbers as musical rhythms. ‘Cimento’ means contest, in this case a contest on paper on how to do musical scales. Three seminal works from this series, one from 1969 and two from 1970, will be on display as part of the exhibition.

‘Alfabeto (scrittura a due mani)’ (1970), and ‘Millenovencentosettantadue (Calligrafia)’ (1972) express Boetti’s growing interest in conceptual art and performance. As part of the 1970s video survey Identifications organised by Gerry Schum, Boetti stood with his back to the camera and wrote on the wall with both hands simultaneously the sentence ‘giovedì ventiquattro settembre mille novecento settanta (Thursday the twentieth of September one thousand one hundred and seventy)’, that day’s date. Recalling this performance, in ‘Alfabeto’ the letters of the alphabet are written in succession with two hands simultaneously. ‘Calligrafia’, reflects Boetti’s fascination for the rigorous, dry and clean look of calligraphy, which according to the artist with its years of tradition and rigor is the opposite of the transgressive action painting. These works also precede later embroidered pieces made of words running vertically and reproducing artist’s sentences.

Three ‘Lavori postali’ from 1972, made with envelopes and stamps from Italy and Afghanistan are organised by Boetti’s permutation thorough system; the different positioning of the stamps leads the number of envelopes in the works. "The vital element of the work is the existence of order and disorder. There is an irony in the order represented by the envelopes, with the graphic obliterations by the postal system, the marks left by the rain when being passed from hand to hand…it represents an order invaded by the disorder of everyday life".

The concept of double is a recurrent theme in Boetti’s work: "we are in front of a natural reality: it is irrefutable that a biological cell divides itself in two parts, then in four and so on; that we have two legs, two arms, two eyes and so on…It is clear that human beings’ existence is based on a binary system - including computers…it is evident that the concept of the couple is one of the archetypal elements of our culture". Double and half are the recurrent couple in Boetti’s work; when one becomes double it automatically becomes half of what it was before and therefore there is always a missing unit. ‘La metà, il doppio e l’unità mancante' (1974) visualises this concept using mathematical rules and geometrical schemes. The subject of the double and the binary system is explored in the following years through works that look less mathematical and objective. In ‘Mani’ (1981), the hand-drawn graph paper highlights the different definitions of the traced image of the artist’s right hand; gradually the difference between the curve line of the hand and the geometric of the graph paper becomes less visible and give e neater image. 'Mani' also recalls Boetti’s idea that 'writing with the left hand is drawing’.

To end the exhibition two important works from the 1980s, 'Clessidra' (1982) and 'Copertine (Marzo 1983)'. Talking about the series 'Clessidra' Boetti said "I realised immediately it could be my last work…and to tell the truth, it could even finish like that, because really I don’t believe I could do anything more concentrated, denser, more diversified, more complete, because there’s calligraphy, text, poetry, this visual fact of the opening out, the tearing, the being ripped into many pieces and finding unity in the negative, in the void".
'Copertine (Marzo 1983)', is one of the firsts of this series started in 1983. In the attempt of documenting a time of geopolitical and cultural changes the artist traced the covers of the most widespread daily newspapers and magazines of the time, somehow producing his own reportage.

Alighiero Boetti (Turin 1940-Rome 1994) is one of the most influential Post War artists. After starting his career with the Arte Povera movement in 1972 he dissociated himself and travelled to Rome where he collaborated with several artists and explored art through an extremely varied range of means. His work has been exhibited worldwide in several large-scale shows including a travelling retrospective in 2012 at MoMA, New York, Tate Modern, London, and Museo Reina Sofia, Madrid. 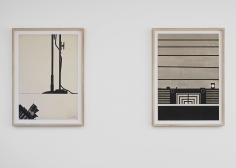