Sprovieri and Archivio Emilio Prini are delighted to present “Colori”, final previously unseen work by Emilio Prini, dated by the artist himself in June 2016, in Rome.

The thirteen unframed 70 x 50 cm (B2) pieces containing as many colours suggest an homage to the 13 artists of Arte Povera, ever present as language/art/life, enclosing the number of gestures that Prini has implemented over time, highlighting how he has continued to develop the use of simple, accessible materials in dialogue with the surrounding space.

“…Italian genius has once more, generously (for free), materialised and made possible a worldwide dream, the fourth art, Arte Povera… oh! You, World, have the famous three Fine Arts? We have four.”

The logic behind the exhibit presented in the gallery operates according to the general theory of “Standard”: a formula applied by the artist to describe the action of an entity in space, challenging common perception and suggesting an analytical and image-creating vision of reality.

Standard is a format, a behaviour in compliance with a common model or with norms of production. For Prini this is a 6.5-metre aluminium section bar to be placed in variable surroundings, the formation of which depending on the space into which it is inserted (1967), it is the portion of space subtended by a passage (1968), it is the behaviour of everyday objects that, inexorably, are consumed (1969). It is the sheets of medium density fibreboard that he will use for the first time at the Rome Quadrennial in 1973.

Similarly to “Manifesto Bianco” (1981), in which the white print defines the entire sheet of paper it extends across, occupying and assuming a position within the space, here too the pure colour, through the passing of time and of light, suggests new impressions. A modifiable content that develops an action, his is a filmic way of seeing that already in the 70s he displayed with hypothetical films put together with endless editing of photographic images.
From the 2000s, the perimeter of a sheet of paper will become space itself, reaching extreme conceptual realisations through signs, intended as entities, when, due to physical impediment, his field of action will become limited.

“Perimetro d’aria”, the opening piece in the historical exhibition “Arte Povera - Im Spazio” (1967), contains the essence of his work: five neon segments, placed in the four corners and at the centre of a room; turning on and resonating via a relay, they obtain a continuous movement/sound that delineates the portion of space/cube of air, the matrix of which being the “Perimeter”, the neon coil placed outside it.

At the end of the 60s and for a good part of the 70s he makes a series of images using an Olivetti 22 on A4 paper, attaining a result of great aesthetic vision, through architectural designs, visual poetry and musical scores. Reflecting, also, on the spiral and on Fibonacci’s numeric sequence, he violates the canonical formula of the golden spiral, obtaining an alternate calculation and, with “formulas for standard non-standard types”, he achieves the indefinite and the unlimited containing all things material, the non-standard, the void. This will lead him, in 2008, with “la Pimpa Il vuoto”, to a paradox: adding in order to subtract, transforming something into nothing.

Prini places emphasis on concepts and ideas by reformulating forms and meaning. His works are presented largely as projects, developed according to a “hypothesis of action”. Weight, thrust, action, perimeter, entity, global, variable, alien, these are but a few keywords. Identity, ideology, theatre, project, consumption are ways of avoiding creativity and invention, relying on genius. His works have a beginning, a duration and an end, nothing is added and nothing is lost:

“The section of floor I have painted has worn out… The photograph I have taken has disappeared… I have developed a void of 4 metres 50 centimetres by pulling a branch off a tree… I have formed a continuous line of equilibrium by transporting it to a distance” he writes in his hypothesis of action in 1968.
The spaces, the paths, the found objects are ousted by the traces they have left.

Through a game of physical rules and impressions, with “Weights Thrusts Actions” he measures the traction of the body within its surroundings and the static weight of each element composing it.
The body of the artist himself takes on a behavioural role through partial appearances or total disappearances. A research suspended between the rules of physics and the singularity of vision, where the work is conceived as an empirical, aesthetic and existential test, developed in relation to a series of data taken from reality. A way of operating and of being, one that resists methods of historicisation and the predefined tools of interpretation, as well as challenging the commercialisation and distribution of its production in the market.

“I do not plan things, I try this and that, I do not visualise the birth of Art (or tragedy) because the C. S. is not the result of pure human labour (because I did not make the chair the table the paper the pen with which I write) I do not create, if possible.”

About the Artist:
Emilio Prini was born in Stresa, Italy, in 1943. In his work Prini used photography, sound and written texts to challenge the viewer's perception and experience. Highlighting particular elements, he often revealed the relationship between reality and its reproduction.
Prini participated in Documenta X (1997), an internationally renowned artist, he was one of the initiators of one of the most influential artistic movements of the second half of the twentieth century: Arte Povera. He takes part in the most significant exhibitions of the time and, with the passing of time, consistent with his formal ideal, minimises his exhibition activity, without ever interrupting his research. 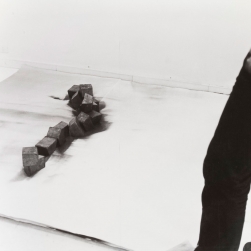