Sprovieri is proud to present the fifth solo show by Jannis Kounellis at the gallery. The exhibition will present a single large installation that occupies the whole space of the main gallery.

The installation was originally presented at Palazzo Vignola in Todi (Umbria) in August 2014, which the following text by Rudi Fuchs refers to.

'More and more emphatically in recent years, heavy black stains have become a basso continuo in the repertoire of Jannis Kounellis.That black lies so deeply submerged in his imagination that I regard it, in fact, as an essential aspect of his artistic 'handwriting'. The form of those stains is undefined. This is moreover how those fluid forms come about: as results or remnants of a process. Three or four summers ago, in a studio in Umbria, I saw him creating them – with men's coats immersed in boiling tar. With an assistant he lifted each heavy coat (black, drenched, rumpled) from the cauldron and let it drop, with a smack, onto a metal plate over which white painter's linen had been stretched. Then it was carefully lifted up and taken away. The remaining irregular form of the pitch-black blotch suggested that it had been made by a coat, but perhaps I saw that because I had witnessed the process. Initially, the blotch was still wet. It trembled a bit but gradually began to dry, so that it became more rigid and a more matte black as well – absorbing more light and shining less.
Kounellis spoke at that time about ombra, shade. In his imagination this is how he evokes the memory of dark shadowy light in the art of Caravaggio, whose obstinacy he recognises in himself. But there is something else: most of Caravaggio's paintings are actually sparing compositions involving few figures, which seem huge because they have been placed in a measured pictorial space. In the work of Kounellis the dramaturgy is similarly restrained. The coats that he uses, for instance, express the scale of the human figure.
This also occurs in a work that he produced in Magdeburg in 2012, in a rugged round space of the museum which is housed in an early medieval monastery. Hung all around at regular intervals (from meat hooks, on pipes) are a number of coats. In the middle of this tonsorium we see a stash of coal (also a formless 'blotch' of black) in a round area formed by burlap bags filled with coal. The morphology here is vague, since the ensemble could just as easily be interpreted in a figurative manner: shadows of figures standing silently around a well, for instance, or around a grave. The black coats are visually suggestive blotches of gloom. I say silently because they hang there so quietly and motionlessly, contemplatively in fact. With these austere means in which color is restrained, that subdued atmosphere in this greyish black space has been just as meticulously orchestrated as the figures in a painting by Caravaggio.
Of course this work in Magdeburg isn't a narrative but rather the expression of an (anonymous) lament. If anything is altered, in terms of the form of the means, the expression changes immediately. These works are not made impulsively but with a great deal of control. This past summer in Todi (not far from Perugia) Kounellis also created a work with coats in a small space at the theatre. Here the expression has a different dramatic quality, because (for the first time, I believe) he was making use of remnants of torn coats. In Magdeburg the coats dropped quietly from a loop in the collar. There they were undisturbed and vertical blotches of black. The outline of the torn rags in Todi is, as we can see, sharp and irregular and jagged. Furthermore, the tatters of black have been skewered to frightful butcher's knives, clasped between two metal bars attached to the wall. And jabbing upward to the ceiling is a pole, from which coats also hang. The space seems to have been split by a flash of lightning – very different dynamics in comparison to the work in Magdeburg.
In Todi the installation is more restless and sinister. The black 'stains', which had a thoughtful and diffuse effect in Magdeburg, are now edgy and ominous due to the torn contours as well as the knives. The dramaturgy is one of bleak excitement – like that in Rembrandt's legendary portrayal The Three Crosses. And it was about the sixth hour, and there was a darkness all over the earth until the ninth hour. And the sun was darkened, and the veil of the temple was rent in the midst. This is how Luke describes the circumstances surrounding the crucifixion of Christ, and in that darkness the grand master of darks and shadows situated the ultimate martyrium. In the final state the dark etching became even darker, but still suspended there among the areas of black is the pale, thin figure of Christ – a desolate and pitiful image. With that in mind I now look, too, at the torn world of the installation in Todi.'
(text by Rudi Fuchs, 2014; translation by Beth O'Brien) 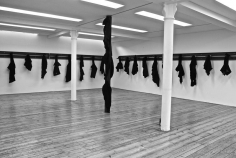 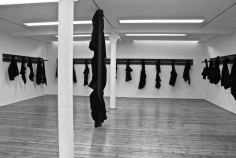 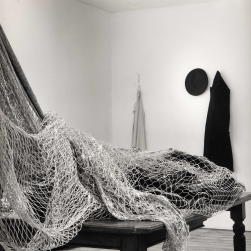